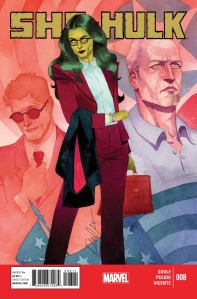 She Hulk vs. Daredevil in court. The next three issues of Charles Soule’s She Hulk pit Marvel’s two best lawyers against each other over a wrongful death case. The defendant: Captain America. Even before reading it, I knew this one would be awesome.

After a brief setup scene, this issue kicks off in She Hulk’s law office with an aged Captain America meeting with his new lawyer. A number of jokes keep this issue entertaining, but for the most part it’s actually a dramatic scene that shows Captain America’s strength of character, refusing to win on the technicality that his death after Civil War would cancel any possible guilt. The following bar scene with Jennifer, Patsy and Angie gives the story a sense of intensity while allowing them to have a bit of fun before the story really kicks off.

Once in LA, the comic gets really good. She Hulk’s method of getting rid of reporters is hilarious, as is the cameo of Madrox’s eccentric lawyer dupe. These entertaining scenes are intermixed with touches of character development for Patsy and Captain America. It’s a brilliant sequence of events that makes this comic more of a legal drama than anything else, even if Jennifer uses her Hulk side a bit. There’s no action, but with a dramatically intense story like this, there doesn’t need to be (and the brief flashbacks suggest there will be some action in the next issue). Everything about the court case’s setup also feels authentic, no doubt helped that Soule is an actual lawyer.

The art by Javier Pulido may not be for everyone, but it’s brilliant. It has a bit of a classic feel that, while appearing 2-dimmensional, it’s intentionally so. The opening scene in the hospital bed is brief and vague, yet the facial expressions say everything you need to know. Facial expressions are always well-drawn in this issue, whether it’s She Hulk’s smug look while talking about her intercom, Patsy’s grin while looking at LA from Stark’s limousine or Captain America’s sad glance when remembering the person he’s been accused of causing the death of. Also, the inside of Stark’s private jet is great, with plenty of space, fancy chairs and even a disco ball. Also, Tony Stark has flying robotic flight attendants. I think we should all take a minute to appreciate that Tony Stark has flying robotic flight attendants. But perhaps the best part of the art is the mostly wordless 2-page montage of She Hulk preparing for the court case, showing that while she’s trying to appear confident, she’s clearly nervous about it.

At this point it’s hard for me to pick my favourite comic of the week, with Uncanny X-Men, Rocket Raccoon and The Legendary Star Lord being as good as they are, but She Hulk 8 might just be it … again. It strikes a very good balance between humour and drama to make a great legal thriller comic with a touch of superheroing. This is quite possibly Marvel’s most unique title right now and I mean that in the best way possible. If you’re the least bit interested in a legal thriller/superhero comic, you should most certainly check this series out.

I am a relatively new comic book fan writing this blog for other new comic book fans and/or people who are interested in comics but don't know where to start. I've always been interested in writing, to the point where I have a college Creative Writing Certificate and I'm currently a year 2 Journalism student. I also have another blog where I mostly make fun of bad movies - www.healed1337.blogspot.com As for how I got into comics, I've always had a passing interest in superheroes: most notably Batman, Spider-man and the X-Men. Until February of 2011 (I think,) my only experience with any of these franchises came from the movies and video games. Shortly after I bought Marvel Vs. Capcom 3 however, I decided to check out X-23, Wolverine's female clone. I ended up reading her Innocence Lost origin story and enjoyed it. From there, I started reading various X-Men comics and it quickly exploded into my newest hobby. My other interests/hobbies include video games, movies, music, playing sports, my dogs and weird news.
View all posts by healed1337 →
This entry was posted in comic review, comics and tagged all new marvel now, captain america, charles soule, comic review, comics, daredevil, hellcat, javier pulido, jennifer walters, legal thriller, marvel comics, multiple man, patsy, she hulk, steve rogers, tony stark. Bookmark the permalink.

3 Responses to She Hulk 8 review