Guardians of the Galaxy 2 review 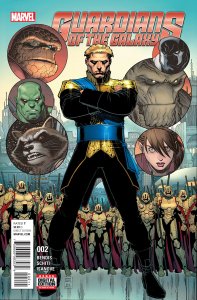 I didn’t pick up the first issue of Brian Michael Bendis’s second volume of Guardians of the Galaxy when it first released. Although I’ve enjoyed part of his first run, other parts of it I found mediocre at best. A handful of issues were bad even. Still, I stuck with it right up until Guardians of Knowhere 2, which ultimately felt pointless. Yet not only is Kitty Pryde a member of this team, and I like Kitty Pryde, but I heard that last month’s Guardians of the Galaxy 1 is actually very good. So I picked it up a week later and really enjoyed it. Let’s see if issue 2 holds up.

At the end of GOTG 1, Spartax is under attack by a survivor of the Kree homeworld, Hala, after Mr. Knife destroyed it in the Black Vortex crossover. That’s where this issue picks up. The opening narration, explaining the surviving accuser’s motivations is actually really good, and it also touches on Hala’s history. The rest of this comic is … ok. There’s a fight scene, but not all that much happens in it. Instead, there’s some talking between the different guardians members and Peter Quill, who’s now king of Spartax. There are some great jokes thrown in with the dialogue, something Bendis is usually good at, but they don’t add anything to the plot or character development. These kinds of issues aren’t inherently bad, but an issue with barely anything happening this early in the series might not be a good sign. The ending cliffhanger is intense and that helps, but is it enough?

The art by Valerio Schiti is really good. The opening montage shows off Hala in its glory days, and the panel of the Kree Empire’s accusers shows how strong the Kree once were. The two page spread of the surviving accuser examining the damage is both breathtaking and haunting with so many corpses flying through space, with all the stars in the background. The fight scene, while quick, does have a sense of progress. Each member of the Guardians is complete with a lot of character detail, and their facial expressions capture their emotions quite well. The environmental detail is always impressive too. Richard Isanove’s colouring is bright and vibrant throughout.

This comic is fun, but that doesn’t stop it from barely moving the story forward. It feels like this issue could have been told in half the time and not lost anything of value. Still, it’s at least worth checking out if you like the Guardians of the Galaxy, and if you enjoyed Bendis’s previous run, you’ll likely enjoy this. And of course, the art does help make up for this issue’s flaws. Whether or not it’s worth sticking with this series greatly depends on what happens in the next issue.

I am a relatively new comic book fan writing this blog for other new comic book fans and/or people who are interested in comics but don't know where to start. I've always been interested in writing, to the point where I have a college Creative Writing Certificate and I'm currently a year 2 Journalism student. I also have another blog where I mostly make fun of bad movies - www.healed1337.blogspot.com As for how I got into comics, I've always had a passing interest in superheroes: most notably Batman, Spider-man and the X-Men. Until February of 2011 (I think,) my only experience with any of these franchises came from the movies and video games. Shortly after I bought Marvel Vs. Capcom 3 however, I decided to check out X-23, Wolverine's female clone. I ended up reading her Innocence Lost origin story and enjoyed it. From there, I started reading various X-Men comics and it quickly exploded into my newest hobby. My other interests/hobbies include video games, movies, music, playing sports, my dogs and weird news.
View all posts by healed1337 →
This entry was posted in comic, comic review and tagged accusers, all new marvel, black vortex, black vortex crossover, brian michael bendis, comic review, comics, guardians of the galaxy, hala, kitty pryde, kree, kree empire, marvel comics, peter quill, richard isanove, spartax, spartax empire, the thing, valerio schiti. Bookmark the permalink.

2 Responses to Guardians of the Galaxy 2 review