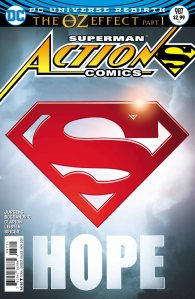 So a bit of background here. I picked up and reviewed the first issue of Action Comics in the DC Comics Rebirth line way back, but when I enjoyed Superman 1 more the next week, I decided to stick to that series instead. I don’t regret sticking with Superman by any means, but I’ve heard that Action Comics is also pretty good right now. So when my local store was in the middle of its anniversary sale, I picked up the first three DC Rebirth Action Comics trades. I enjoyed them enough to pick up this issue. We are also fast approaching Action Comics 1000 after all, and anyone who enjoys Superman in the slightest will probably want to pick up that celebratory issue when it comes out. Also, there’s a major reveal that also affects both Superman and maybe even Detective Comics in this issue.

Written by Dan Jurgens, Action Comics 987 starts off normal enough for a Superman comic. After a truck with stolen medicine crashes off of a bridge, Superman swoops in to save the truck and its medical supplies, and then carries the supplies to the war torn country that needs them to save everyone time. It’s a nice little introduction scene, followed by an amusing moment where Clark and Lois take Jon to the Daily Planet for the day, where Steve Lombard makes a fool of himself as usual. But among these scenes, there’s a shadow figure named Oz who’s watching a whole bunch of evil things happening at once, guided by people with Z markings.

The second half of the comic shows Superman being overwhelmed by a whole bunch of disasters happening at once, and even with all of his powers, he can’t take care of everything at once. Some of them are smaller matters, like a rhino being shot for his horns. Others are major, like a big oil leak in the ocean and a war between government forces and rebels … and the previously mentioned medical efforts caught in-between. It’s rough stuff, with Clark clearly distressed by the fact that he can’t save everyone. In the midst of all this, Oz reveals himself to Superman. I won’t spoil who it is, and since I’m not caught up on Action Comics I don’t know how well it’s been foreshadowed, but to me it’s a pretty crazy twist. I’m not entirely sure what to think of it yet, but I really want to know where they’re going with this. It’s also worth noting that he also shows up in this week’s Supergirl, and I’m strongly considering a review of that as well.

The art by Viktor Bogdanovic is great. The panels where Oz is in the shadows obscures his face enough that you can’t tell who it is, but he still looks slightly familiar. It’s a creepy environment filled with shadows, machinery well beyond our years and displays showing what he’s watching in the backgrounds. There are nice little touches like water draining from the truck when Superman lifts it from the water, Jon’s increasingly bored expression as Steve is trying to brag about his accomplishments, and all the single panels during Oz’s scene that explain everything you need to know about the different situations even without the exposition. Mike Spicer’s colouring is also great. The scenes at day are bright and colourful, adding to the more optimistic mood of the comic’s first half, while Oz scenes are darker and generally tinted green like his cloak for a more sinister feel.

Based on this issue I still prefer the Superman series, but Action Comics 987 is really good. There’s a strong mix of action and fun. There’s a good mix of optimistic scenes and much darker scenes, contrasting the first and second half of the comic in a dramatic fashion. I can’t comment on how effective the reveal is, but there’s a lot of potential with it in more ways than one. Since the twist may also effect Detective Comics and maybe a few other titles, this is at least worth a look for anyone reading those as well.

I am a relatively new comic book fan writing this blog for other new comic book fans and/or people who are interested in comics but don't know where to start. I've always been interested in writing, to the point where I have a college Creative Writing Certificate and I'm currently a year 2 Journalism student. I also have another blog where I mostly make fun of bad movies - www.healed1337.blogspot.com As for how I got into comics, I've always had a passing interest in superheroes: most notably Batman, Spider-man and the X-Men. Until February of 2011 (I think,) my only experience with any of these franchises came from the movies and video games. Shortly after I bought Marvel Vs. Capcom 3 however, I decided to check out X-23, Wolverine's female clone. I ended up reading her Innocence Lost origin story and enjoyed it. From there, I started reading various X-Men comics and it quickly exploded into my newest hobby. My other interests/hobbies include video games, movies, music, playing sports, my dogs and weird news.
View all posts by healed1337 →
This entry was posted in comic, comic review and tagged action comics, clark kent, comic review, comics, dan jurgens, dc comics, dc rebirth, jon kent, lois lane, mike spicer, oz, superman, the oz effect, viktor bogdanovic. Bookmark the permalink.