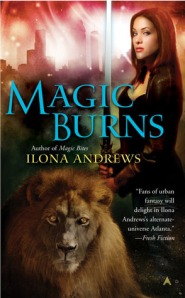 About 7 months after reading Magic Bites, I finally got around to reading Magic Burns. Burns is the second Kate Daniels novel in the series of seven (number 7 being released this summer). It’s written by Ilona Andrews. The first book was a lot of fun as it followed Kate Daniels, a magic-wielding mercenary who had to solve a bizarre series of murders while trying not to anger either the Beast Clans or the Masters of the Dead. It was dark, weird and often hilarious. While most book sites catagorize this into urban fantasy, it’s probably better to describe this series as high fantasy or dark fantasy. Regardless, if Magic Bites is really good – Magic Burns is amazing.

As usual, this isn’t really a review. This is more of a journal from a writer’s perspective. As one who’s trying to break into the novel industry, I probably don’t read enough novels. It was this past December that I decided that every month I’m not writing a novel, I’d read at least one instead. These are my thoughts as a writer, although I’ll also give my thoughts on this book as a reading experience. I should also apologize for accidentally titling my previous post “Magic Burns”. Whoops.

While Bites was a fun book, it had its faults. It didn’t explain how the world worked in the most comprehensible way, and there were times when the main character was a bit too mouthy. Everything that was fun about that book was fun here, but with most of its shortcomings removed altogether. Kate Daniels is more developed as a character, and is even more likeable as a result. She still has a bit of a caustic personality, but she has a sense of humour and a good heart to balance herself out.

The way magic works is also better explained, which is a good thing since it’s running rampant in Atlanta. When the magic is on, electricity doesn’t work and when technology is on, magic doesn’t work. Usually it flows smoothly between the two like the tide, but this book takes place during a flare, where not only do the waves rarely last longer than an hour, but the magic hits hard enough that everyone physically feels it. A normally greedy information specialist named Saimen is so drunk off power that he dances around naked and hit on everything in sight. The shapeshifters are even more feral than usual. Weird stuff happens during a flare.

The stakes are also higher than in Magic Bites. The first book’s villain was a powerful magical being who specifically targeted Kate. In this one, Kate’s up against a deity who’s trying to break into the physical world. If that’s not enough, she has to deal with a teleporting thief, undead hunters with moveable hair and poisonous claws and their undead pilot with tentacle arms. But worst of all, she has to take care of a kid.

I’m so glad I read this book, as both a reader and a writer. As a piece of entertainment, it was an absolute delight. As a writer, it may influence my writing style a bit. No matter how dark this book gets, it’s always entertaining with its snarky writing style and how easily it embraces its weirdness. It makes me want to write in a more entertaining way and to be more playful in my word usage.

It also had a much faster pace than the original, and had a lot more action scenes. The final fight is a full-on battle, with 100 shapeshifters, witches and a squad of vampires working together against the enemy. That’s reassuring to me, since there are times when I feel I might have a bit too much action in my own work. I try to make sure every fight scene has importance to either the characters or the plot, and it’s better if they have significance to both. Every action scene in Magic Burns is there to progress the plot, enhance the world or at least reveal Kate’s personality a bit more. They all have a slightly different feel, and they’re always entertaining. So far, I’ve also tried to keep them varied.

I am a relatively new comic book fan writing this blog for other new comic book fans and/or people who are interested in comics but don't know where to start. I've always been interested in writing, to the point where I have a college Creative Writing Certificate and I'm currently a year 2 Journalism student. I also have another blog where I mostly make fun of bad movies - www.healed1337.blogspot.com As for how I got into comics, I've always had a passing interest in superheroes: most notably Batman, Spider-man and the X-Men. Until February of 2011 (I think,) my only experience with any of these franchises came from the movies and video games. Shortly after I bought Marvel Vs. Capcom 3 however, I decided to check out X-23, Wolverine's female clone. I ended up reading her Innocence Lost origin story and enjoyed it. From there, I started reading various X-Men comics and it quickly exploded into my newest hobby. My other interests/hobbies include video games, movies, music, playing sports, my dogs and weird news.
View all posts by healed1337 →
This entry was posted in book review, novels, writing and tagged beast clan, beast lord, dark fantasy, deity, evil god, fantasy, high fantasy, ilona andrews, kate daniels, magic, magic bites, magic burns, masters of the undead, mercenary, novel, novel reading, novels, shapeshifters, undead, urban fantasy, vampire, vampires, writing. Bookmark the permalink.