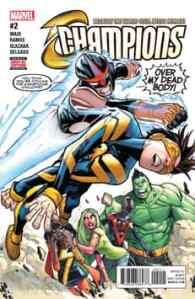 The first issue of Champions introduced a new superhero team made up entirely of teenagers, most of which have some sort of connection to the Avengers. It showed off a fun, optimistic concept of young heroes wanting to make a positive difference in the world, preferring to avoid any kind of excessive force. This is a bit of a downtime issue, but a fun one at that.

Champions 2, written by Mark Waid, serves several functions at once. For those who aren’t familiar with most of these characters, it explains their powers quite effectively and on a couple occasions, shows some unique uses for their powers. At the same time, there are more than enough jokes, little character moments and there’s some tension between characters to keep the rest of us entertained. Probably the funniest moment comes from when the Totally Awesome Hulk demonstrates how high he can jump. The most dramatically effective moment is when Cyclops offers to join the team, and their little debate shows a very balanced set of views within the team and that they’re all more reasonable than the adults are acting in Civil War II.

The somewhat cartoonish art by Humberto Ramos works quite well for this comic’s mood, even if it won’t be for everyone. The opening spread of the team holding food over a campfire sets the scene perfectly, and the next panel is complete with a number of trees in the backgrounds, each character looking relatively relaxed, and there’s the nice touch of Nova sitting on his helmet. Facial expressions do a good job of conveying emotion, like the Hulk’s smug looks when he’s bragging or goofing off, Ms. Marvel’s often annoyed looks when others act immature, and of course Viv’s somewhat creepy emotionless face throughout most of the issue. Edgar Delgado’s colouring is also good. There’s a great balance between bright and colourful panels around the campfire, and darker panels when they move further away. There’s also great use of glow from the flames and shadows.

All in all, this is a fun comic that also does a great job at introducing each character to new readers, without boring those well versed in Marvel Comics. The tensions between a couple team members could make for some interesting conflicts, while this issue also shows some great potential for power combinations between different team members. If you’re interested in an optimistic superhero team book featuring teenagers, both well-known and relatively new, check this series out.

I am a relatively new comic book fan writing this blog for other new comic book fans and/or people who are interested in comics but don't know where to start. I've always been interested in writing, to the point where I have a college Creative Writing Certificate and I'm currently a year 2 Journalism student. I also have another blog where I mostly make fun of bad movies - www.healed1337.blogspot.com As for how I got into comics, I've always had a passing interest in superheroes: most notably Batman, Spider-man and the X-Men. Until February of 2011 (I think,) my only experience with any of these franchises came from the movies and video games. Shortly after I bought Marvel Vs. Capcom 3 however, I decided to check out X-23, Wolverine's female clone. I ended up reading her Innocence Lost origin story and enjoyed it. From there, I started reading various X-Men comics and it quickly exploded into my newest hobby. My other interests/hobbies include video games, movies, music, playing sports, my dogs and weird news.
View all posts by healed1337 →
This entry was posted in comic, comic review and tagged all-new marvel, amadeus cho, comic review, comics, cyclops, edgar delgado, hulk, Humberto ramos, Kamala Khan, mark waid, marvel comics, ms. marvel, nova, sam alexander, scott summers, totally awesome hulk, viv vision. Bookmark the permalink.