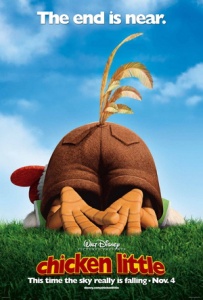 Around the time that Animated Disney movies weren’t doing so well in the early 2000’s, DreamWorks was coming out with a number of mega hits. Probably their most well-known early hit, 2001’s Shrek, won the very first Academy Award for Best Animated Feature, and it earned $484 million on an $80 million budget. Its sequel, 2004’s Shrek 2, was the highest grossing animated movie ever at the time of its release, and still remains in the top 10, with $920 million earned on a $150 million budget. That same year, Disney released Home On the Range (I hate that movie). It bombed, earning $103 million on a $110 million budget. Chicken Little, released the next year, kind of feels like Disney surrendering to the DreamWorks formula.

Chicken Little has two unique distinctions for Disney Animated Studios. One: It’s the first fully CGI movie Disney released without any assistance from Pixar. They put half of their traditional animators through a rigorous 18-month course in digital animation early in production to help make it happen. Two: as of this writing, it’s the worst rated Disney Animated Studios movie in history. It’s got a 36% rating on Rotten Tomatoes and a 48% on Metacritic. Despite the harsh critical response, it earned $314 million on a $150 million budget. After watching this movie, I really need to ask,

How did this movie make a profit?

Roger Ebert and Richard Roeper gave the movie two thumbs down, and that’s significant considering Ebert usually gives even the Disney movies with mixed reception a thumbs up. Richard Roeper said of the movie, “I don’t care whether the film is 2-D, 3-D, CGI, or hand-drawn, it all goes back to the story.” In his written review, Ebert specifically called out the movie’s inclusion of baseball and space aliens. “As a general rule, if a movie is not about baseball or space aliens, and you have to use them anyway, you should have started with a better premise.”

Chicken Little is loosely based on the fable Henny Penny, more commonly known as Chicken Little. The famous phrase, “The sky is falling”, is featured prominently in the original story and almost every adaptation there is. It’s often used to tease people who are unreasonably afraid, and the story is often used as a cautionary tale of fear mongering, whether it’s justified or not. The first modern printed appearance is thought to come from the Brothers Grimm collection of fairy tales, although the tale goes as far back as 500 BC.

Before I get into 2005’s Chicken Little, you should know that this is not actually the first time Disney Animation Studios has told the story of the young chicken shouting “The sky is falling”. The first was a short film released in 1943. The short was meant to be a cautionary tale about the dangers of blindly listening to your leaders. It tells the dangers of propaganda. Besides that, it’s a slightly comedic take of a famous fable where the villain actually wins. I’ve embedded the short below in case you want to watch it.

Instead of being a cautionary tale of any kind, 2005’s Chicken Little goes full-blown comedy. And the movie sucks as a comedy. The opening scene throws so many lame and incomplete jokes at you that you don’t even have the time to breathe. There’s a water tower that falls down, and then starts rolling through the streets. For a moment you see Indiana Jones and the Raiders of the Lost Ark playing in a cinema, and then the water tower crashes through the screen just as the giant boulder starts chasing Indiana Jones. There’s an overabundance of pop culture references thrown into the movie with no context whatsoever. It makes the movie feel like a complete mess.

There are also a bunch of pop songs sprinkled throughout the movie. Some of them begin with the original vocalists singing them, but they’re almost always taken over by the movie’s characters within seconds. The singing quality when the characters take over is about the same as an average group of friends singing along to their favourite song on the radio. It’s not terrible, but by no means is it good. Even the closing credits features a variety of characters singing “Don’t Go Breaking My Heart”. How does “Don’t Go Breaking My Heart” tie into any of the movie’s themes? Short answer, it doesn’t.

The writing for Chicken Little began in 2001. They first envisioned it about a young, overreacting and insecure female chicken. She would go to summer camp to build on her confidence and repair her relationship with her father. They even casted the female chicken before Disney’s new animation president, David Stainton, decided to change Chicken Little into a male. Further story changes were made, and at one point, 25 full scenes were chopped out of the script. I kind of wonder whether the original idea would have been better or worse.

What Disney ended up creating is a story about Chicken Little, a young chicken much smaller than his father, Buck Cluck. The movie starts with him ringing the school bell, which also doubles as an alarm for the entire town. He shouts that the sky is falling, that some sort of hexagon hit him in the head, but he can’t find the hexagon. Nobody believes him.

Several months later, Chicken Little is a complete social outcast. It’s downright cruel, with his story still showing up in the paper. Both the staff and students at his high school are constantly teasing him, and there’s even a movie about his craziness in the works. Even his single father is distancing himself from Chicken Little. In any normal world, that is at least dangerously close to driving someone to suicide.

It also makes pretty much everyone in this movie unlikeable. Buck Cluck is a terrible father who never actually talks to his kid, or believes him for that matter. The school bus often “forgets” to pick up Chicken Little at his stop, forcing him to jog to school, which often makes him late. The principal automatically assumes that when something bad happens at the school, Chicken Little is responsible. When he joins his school’s baseball team, he’s not even given a proper chance to try out and is permanently relegated to the bench. And yet when he hits a home run after too many other players are injured, suddenly he’s the town hero?

The only real friends Chicken Little has are his fellow outcasts. There’s the ugly duckling, a fish out of water and a fat pig who’s a huge nerd. This movie’s writing couldn’t get any lazier with these characters. The Ugly Duckling does her best to try to cheer Chicken Little up, or at least pushes him to try and have a real conversation with his father. She’s supposed to be the wise one, but more often than not she’s just boring. The pig just spouts most of the pop culture references and keeps wimping out. The fish out of water, well … there’s a scene where he builds a paper Empire State Building and some paper planes, climbs on top and pretends to be King Kong. There’s no reason for this. It’s never mentioned again in the movie. It’s not even close to funny. He just does it. That’s the only thing I remember about his character in this movie.

It turns out that the sky isn’t quite falling, but it’s instead an alien invasion of sorts. They have these projection beams that make the bottoms of their ships look like the sky. When Chicken Little and his outcast friends find the alien ship and discover what’s going on, they try to warn the town. Again, nobody believes Chicken Little and the whole outcast story starts all over again. That is until the very next day, when the full-scale invasion begins.

I won’t spoil what goes down, but the climax is just as lame as the rest of the movie. Most of the jokes are predictable, and even the resolution justifies everything Chicken Little ever said. You can see this coming as soon as you know what the aliens want. And of course the movie ends with everyone in the town watching the debut of the in-universe Chicken Little story, which turns it into a pure sci-fi action movie portraying Chicken Little as a manly ship captain. Anyone even half paying attention to this movie sees this coming a mile away.

Not even the animation is any good in Chicken Little. Most of the characters are built with what the Animation President described as “the roundness” as seen in classic Disney shorts. It’s a look that really doesn’t suit CGI very well. The fast paced animation looks unnatural and would be more fitting for a cheap TV series than a theatrically released movie. Disney sparingly used digital matte paintings, like trees and a baseball diamond, and planted them into the backgrounds using Photoshop.

I’ll give the movie this much though. From a technical point of view, the animation is really good for a bunch of people used to traditional animation. It’s just the style that doesn’t work.

I hated Home On The Range, and it’s still my least favourite of the Disney Animated Movies that I’ve seen so far. With all that said, Chicken Little is the worse movie. The story is a complete mess. Most of the characters are completely unlikeable. Of the characters who aren’t unlikeable (just the misfits really), they’re nothing special either. The comedy is not funny. The music feels like it’s tacked on just to imitate Shrek’s success. This is the bottom of the barrel for Disney Animation Studios, and I cannot in good conscience recommend this to anyone.

Even the poster just shows Chicken Little’s butt. That should tell you something about the movie’s maturity level.

Next up is Meet The Robinsons, which is where the Disney animated movies start to finally improve again. After that, it’s Bolt, which some people credit as the beginning of Disney’s current revival period. Then it’s Princess and the Frog, followed by Disney’s 50th animated feature. I’m particularly looking forward to talking about the 50th movie. Also now that I’ve watched the 46th movie, there are only 10 movies left in Disney’s animation canon.

I am a relatively new comic book fan writing this blog for other new comic book fans and/or people who are interested in comics but don't know where to start. I've always been interested in writing, to the point where I have a college Creative Writing Certificate and I'm currently a year 2 Journalism student. I also have another blog where I mostly make fun of bad movies - www.healed1337.blogspot.com As for how I got into comics, I've always had a passing interest in superheroes: most notably Batman, Spider-man and the X-Men. Until February of 2011 (I think,) my only experience with any of these franchises came from the movies and video games. Shortly after I bought Marvel Vs. Capcom 3 however, I decided to check out X-23, Wolverine's female clone. I ended up reading her Innocence Lost origin story and enjoyed it. From there, I started reading various X-Men comics and it quickly exploded into my newest hobby. My other interests/hobbies include video games, movies, music, playing sports, my dogs and weird news.
View all posts by healed1337 →
This entry was posted in movies and tagged aliens, animated, animated movies, animation, buck cluck, chicken little, comedy, David Stainton, disney, disney movies, disney studios, don't go breaking my heart, henny penny, movies, richard roeper, roger ebert, sci-fi, science fiction, the ugly duckling. Bookmark the permalink.