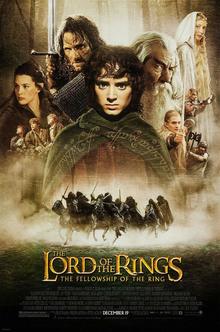 Orc body suits to go along with over 10,000 Orc heads. They built 10,000 real arrows and 500 bows. They even created a new kind of crossbow for the Uruk-hai that could fire faster. Principal filming took place between October 1999 and December 2000 in New Zealand, with the bulk of the footage for the trilogy shot back to back. There were even a couple scenes from Return of the King shot before the majority of Fellowship of the Ring. There’s one particular moment in Return of the King where when you’re looking at Sam, you see footage filmed on November 24, 1999, yet when you see Frodo, it was filmed on November 30th, 2000. Somehow the footage blends seamlessly.

Part of the reason they filmed this way was as a weather safety measure, as a flood interrupted a number of their outdoor shots. The Fellowship was originally supposed to have a river chase that they needed to cancel filming for because winter came too soon. That’s at least part of the reason why The Desolation of Smaug has a river chase. Pickup shooting took place between 2001 and 2004 (yes, there were several shots for the extended cut filmed after Return of the King won its 11 Academy Awards). That’s the kind of passion, dedication and care that went into this trilogy.

Some of the casting also happened in the middle of filming. Although most of the actors had been cast before filming began, Viggo Mortensen wasn’t the original choice for Aragon. Stuart Townsend was initially cast in the role, but was replaced during filming because Jackson realized he was too young. Nicolas Cage, Daniel Day-Lewis and Russell Crowe were each offered the role at one point, but they all turned it down for various reasons. Mortensen’s 11-year-old son, a fan of the book, convinced him to take the role.

Elijah Wood was the first person cast for the film. As a fan of the book, he sent in an audition tape dressed as Frodo, reading lines from the book. He was selected out of 150 actors who auditioned. Ian McKellen joined the cast as Gandalf, after Sean Connery turned it down for not understanding the plot, and Patrick Stewart turned it down because he disliked the script. They had to adjust McKellen’s filming schedule as there was a two-month overlap with X-Men. John Rhys-Davies joined the cast as Gimli the dwarf. He was actually allergic to the prosthetics he wore, which gave him eczema around his eyes.

Last but certainly not least, Christopher Lee jumped at the opportunity to join the cast, being a major fan of the book who also personally met JRR Tolkien. He wanted the role of Gandalf, but they considered him too old, so he happily took on the role of Saruman instead.

There is plenty more fascinating behind the scenes information out there for this trilogy. Seriously, if you’re a fan of these movies, it’s worth watching all of the behind the scenes footage on the Extended Edition DVD/Blu-Ray sets.

It’s no secret that Fellowship of the Ring was a major success. It earned $887 million globally, making it the second highest earning movie of 2001 and the fifth highest in history at the time of its release. It holds a 91% rating on Rotten Tomatoes, and it received 13 Academy Award nominations, winning 4 (Best Cinematography, Best Visual Effects, Best Makeup and Best Original Score). It won numerous other awards, including five BAFTAs (Best Film, Best Direction, Best Special Effects, Best Make-up and the Audience Award).

I was actually a bit late to the Lord of the Rings party. I didn’t see either of the first two movies in theaters. I only first saw The Fellowship of the Ring mere weeks before The Two Towers released on DVD and VHS. Furthermore, I’ve actually never seen the theatrical cut of The Fellowship of the Ring. I’ve only seen the extended cut that released about a month before The Two Towers released theatrically.

Before I saw the movie, I doubted that I’d enjoy it. At the time I was still a full-on Star Wars fan. Having not fully developed my taste in movies, I thought the first two prequels were good, even if my subconscious knew something was off about Attack of the Clones. When a very good friend of mine received the extended edition for his Birthday, we watched it. It took me about 20 minutes to understand the appeal, and I was hooked by the time they escaped the Mines of Moria. I bought my own copy the next day, pre-ordered The Two Towers on VHS, and even started reading the Two Towers book, getting about half-way through it around the time the movie released.

The Fellowship of the Ring is a masterclass in world building, character development and tone setting. It’s a long movie, especially with the 30 minutes added to the extended cut, but it never feels long. It never feels unnecessarily stretched out like the first Hobbit movie did. There’s a lot of information thrown at viewers, but it’s intermixed with fun character moments, brilliantly choreographed action scenes, and an overall uneasy tone that builds as the movie progresses. Lord of the Rings is a dark story, but never so dark that it doesn’t find room for lighter moments and fun. It’s a big, epic story, yet the attention to detail is amazing.

It helps that Howard Shore’s soundtrack is among the most epic sounding scores in film history. It firmly establishes a number of themes that are built upon in the other two movies. The Fellowship theme (The Ring Goes South) is inspiring, the opening theme is mysterious and unnerving in a way that perfectly matches the prologue, and the Journey in the Dark theme is the perfect blend of quiet, creepy moments and a touch of grand themes to match the impressive underground structures of the Dwarves.

I’m not sure what else to add to this movie. Like the books, it’s been dissected so many times that there’s very little new to say about it besides my own experience. Lord of the Rings opened my eyes to a whole new world. It’s where I really started to expand my taste in fiction. It’s where I started to learn what quality filmmaking really is. It’s where I started learning about how important character development is. It influenced a lot of my writing going forward. I started focusing more on characters and story, instead of only writing over the top action scenes and connecting them with very quick, poorly written scenes. Every time I go back and rewatch these movies, I realize how well constructed they are.

Next up is The Two Towers, and one could have a great argument as to which of these first two movies is the greatest Fantasy film of all-time. That’s not to say that Return of the King isn’t also brilliant, but it does have a few shortcomings that the other two LOTR movies don’t have. We’ll get to that though.

I am a relatively new comic book fan writing this blog for other new comic book fans and/or people who are interested in comics but don't know where to start. I've always been interested in writing, to the point where I have a college Creative Writing Certificate and I'm currently a year 2 Journalism student. I also have another blog where I mostly make fun of bad movies - www.healed1337.blogspot.com As for how I got into comics, I've always had a passing interest in superheroes: most notably Batman, Spider-man and the X-Men. Until February of 2011 (I think,) my only experience with any of these franchises came from the movies and video games. Shortly after I bought Marvel Vs. Capcom 3 however, I decided to check out X-23, Wolverine's female clone. I ended up reading her Innocence Lost origin story and enjoyed it. From there, I started reading various X-Men comics and it quickly exploded into my newest hobby. My other interests/hobbies include video games, movies, music, playing sports, my dogs and weird news.
View all posts by healed1337 →
This entry was posted in Uncategorized and tagged academy award, aragon, bafta, boromir, christopher lee, elijah wood, epic fantasy, fantasy, fantasy movies, frodo baggins, gandalf, gimli, ian mckellen, john rhys-davies, lord of the rings, lord of the rings: the fellowship of the ring, lotr, middle earth, miramax, movie review, movies, new line cinema, peter jackson, saruman, saul zaentz, sean bean, the fellowship of the ring, viggo mortensen. Bookmark the permalink.