Although several previous Disney Animation features had adventure elements, 1953’s Peter Pan was Walt Disney’s first pure adventure film. Based on the play “Peter Pan, or the Boy Who Wouldn’t Grow Up” by J.M. Barrie, it stars a young boy who flies and resides in the magical Neverland. Peter Pan was one of Walt Disney’s favourite stories, and he originally intended it to be his second feature film. He couldn’t acquire the rights for about 4 years, and that’s when the Second World War halted pretty much everything for his studio.

Peter Pan was very successful upon release, both critically and commercially. In fact, it’s one of the few movies in cinematic history that actually made more money in its second weekend than its first – almost doubling its weekend profit. Michael Jackson referred to it as his favourite movie, and even named his ranch after Neverland. Ronald D. Moore sited the movie as part of his inspiration behind the Battlestar Galactica reboot in 2004. A few people criticized some of the changes in the story (it pretty much removed Peter Pan’s entire backstory), but I think that actually helps the overall flow, feel and mystery in the movie.

Unlike a lot of Disney’s previous animated features, Peter Pan didn’t revolutionize animation in any way. It did however utilize a lot of Disney’s earlier improvements. There’s a touch of Dumbo’s high altitude land appearance, where if you’re high enough, Neverland kind of looks like a map. The animation behind the crocodile, moving in perfect synch with the clock inside him, is just fun and creative. The humans on the other hand usually move realistically, save for the Indian chief’s insanely wide mouth. The mermaids look almost like they belong in Fantasia. The environments in Neverland are well-varied, colourful and they feel like they belong in a pure child’s fantasy movie. 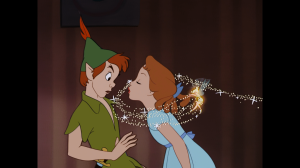 The soundtrack is also fun. It captures the fun and somewhat silly nature of the fight scenes well. The songs are upbeat, and while they feel like they belong in the 50’s, I mean that in a good way. The music that shows up whenever the crocodile chases after Captain Hook is calm and sticks to the beat of the clock, with a touch of a comedic tone. 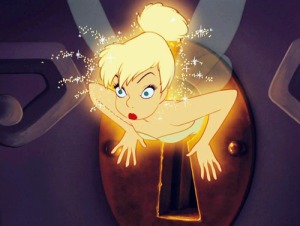 There’s a great variety of characters, and the voice actors are clearly having fun with this movie. Kathryn Beaumont (who also voiced Alice in the previous movie), sounds a touch older and more mature as Wendy. She starts the movie off as not wanting to grow up, but as the movie goes on, she realizes that not only does she need to, but her younger brothers need her to. Bobby Driscoll perfectly portrays Peter Pan as a young man who is unashamedly childish, resisting the idea of growing up as much as possible. He matures a bit over the course of the story, but he’s still in love with the fact that he’s leading a bunch of lost boys who will stay young as long as they remain in Neverland. There’s also Tinkerbell, who starts off the movie being very jealous of the special relationship Peter and Wendy seem to have, to the point where she’s willing to betray Peter, but she learns from her mistake by the end of the movie. I can see why some people think she’s unlikeable, but in a way, she’s the most fascinating character, and she clearly learns the most out of everyone.

Hans Conreid voices both Wendy’s father and Captain Hook. The father isn’t in the movie much, but he clearly cares for his children, even if he’s a bit harsh when it comes to shutting down their wild imaginations. Captain Hook serves as a great villain, balanced well between a vengeful, devious captain of the pirates and a complete coward when it comes to the crocodile. He’s equally comedic and menacing at once, but not too menacing for young children to enjoy.

The action is almost purely comedic. When Peter and Hook fight, Peter clearly isn’t taking the fights seriously, and he easily dodges the Captain’s every attack by flying around, or deflecting it with his tiny knife. The only moment in the movie you might fear for anyone’s safety is either when Wendy is forced to walk the plank, and you wonder if Peter can rescue her in time, or when Peter agrees not to fly in his apparent final duel with Hook. Neither of these moments last too long. By no means is this a criticism, but if you’re hoping for an adventure movie with tense action, this might not be for you. However it makes this movie easy to show to younger kids.

With all these praises said, you can’t talk about Peter Pan without mentioning the Indians scene. There’s no way around it – the portrayal of the Indians in this movie is straight up racist. I’m sure it wasn’t intended to be, and they are kind of entertaining, but … yeah. Their “What Makes the Red Man Red” number talks about how the Indians have red skin because they blushed too much at the sight of pretty women, and that they used to be white. The song is often cut from TV edits of the movie, the Return to Neverland straight to video sequel removes the Indians entirely. The recent live action Pan movie from Sony Pictures changes them to a vague ethnicity instead of having Native Americans. Marc Davis, one of the supervising animators behind the film, acknowledged the racist portrayal years later. He stated that if they made the movie today, they might not have included the Indians, and they certainly wouldn’t have portrayed them as they did.

I won’t criticize the movie too much when I’m sure they didn’t intend it to be racist, and it really wasn’t all that uncommon in the 50’s, but it is worth keeping in mind. If an ignorant portrayal of Native Americans would bother you, it might be best to skip this one. If you can look past it, than this movie is an easy recommendation for kids. It’s a pure adventure film with a bunch of clever slapstick comedy, fun action scenes and an overall optimistic feel. It was one of my childhood favourites, and while I don’t enjoy it as much now, it’s still fun to watch. There are other adaptations of Peter Pan that are also very good, like the 2003 version (which not only doesn’t feel racist, but hired real Native Americans). The 2003 version generally feels optimistic, but the action is more intense and there is a touch of tragedy behind Peter Pan’s characterization. Just avoid 2015’s Pan.

Next up is Lady and the Tramp, the only Disney Animated movie between 1950 and 1970 that I’ve never seen before. The only thing I know about it is the famous spaghetti kiss scene between two dogs, and I’d rather keep it that way going in. Sleeping Beauty is next, followed by 101 Dalmatians.

I am a relatively new comic book fan writing this blog for other new comic book fans and/or people who are interested in comics but don't know where to start. I've always been interested in writing, to the point where I have a college Creative Writing Certificate and I'm currently a year 2 Journalism student. I also have another blog where I mostly make fun of bad movies - www.healed1337.blogspot.com As for how I got into comics, I've always had a passing interest in superheroes: most notably Batman, Spider-man and the X-Men. Until February of 2011 (I think,) my only experience with any of these franchises came from the movies and video games. Shortly after I bought Marvel Vs. Capcom 3 however, I decided to check out X-23, Wolverine's female clone. I ended up reading her Innocence Lost origin story and enjoyed it. From there, I started reading various X-Men comics and it quickly exploded into my newest hobby. My other interests/hobbies include video games, movies, music, playing sports, my dogs and weird news.
View all posts by healed1337 →
This entry was posted in movies and tagged adventure movie, animated movies, animation, bobby driscoll, captain hook, disney, disney studios, hans conried, indians, kathryn beaumont, movies, neverland, peter pan, tinkerbell, walt disney, wendy darling, what made the red man red. Bookmark the permalink.