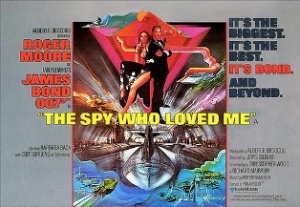 Unlike Man With The Golden Gun, in which I skipped the production cycle of the movie, there’s so much to talk about with The Spy Who Loved Me’s production that this post will mostly be talking about that. For one, since the Bond film franchise began, all of the official Eon Production movies were produced equally by Albert R. Broccoli and Harry Saltzman. This movie is where that changes. Due to personal financial troubles, his wife’s terminal cancer and suffering from clinical depression, Saltzman sold his half of the franchise shortly after Man With The Golden Gun’s release. That’s only where this movie’s production struggles began.

Broccoli found it difficult to find a director for this movie. They first approached Steven Spielberg, who was in the middle of post-production with Jaws. I’m sure Spielberg could have made a great James Bond movie, but they ultimately decided against him. They also approached Guy Hamilton, who had directed the previous three Bond movies as well as Goldfinger, but he left the project when he was offered to direct the first Christopher Reeves Superman movie. Funny enough, Richard Donner later took over Superman. Eventually, Lewis Gilbert landed the directing job, having previously directed You Only Live Twice.

The script also proved to be a hurdle, going through several revisions by a number of different writers. They originally wanted to bring back Ernst Stavro Blofeld as the villain, however Kevin McClory owned the film rights to Thunderball, and refused to let them use Blofeld’s character or his SPECTRE organization. This delayed the movie’s production further. They changed the villain to Karl Stromberg, a reclusive megalomaniac, and they brought back the villain’s plot to essentially take over the world. They also needed a fresh story, since Ian Fleming requested them to not use any major story elements from the novel of the same name.

That novel never released during Fleming’s lifetime. It departed from the normal Bond novel format, written from the perspective of a young Canadian woman who spends most of the novel narrating her different love affairs while in England. Bond didn’t even show up until two thirds of the way through the book. It was the shortest and most sexually exploitive Bond novel that Fleming wrote, and he hated how it turned out. They only released it after Fleming’s death, and they even released a second The Spy Who Loved Me novel based on the movie’s plot, written by one of the movie’s final writers Christopher Wood.

Eon Productions also struggled to find the lead Bond girl, Anya Amasova/Agent Triple X (a KGB agent who works with Bond through most of the film). Barbara Bach was cast only four days before filming began. She didn’t even realize her role would be a major one, treating her audition as if they expected her to play a bit part. 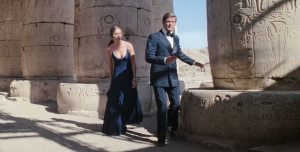 They didn’t want to repeat what they did for the volcano base in You Only Live Twice, which set designer Ken Adam described as “a workable but ultimately wasteful set”. But at the same time, there didn’t exist a studio large enough to house the interior of Stromberg’s supertanker. Construction began in March of 1976 of a new sound stage at Pinewood, dubbed the 007 stage, for $1.8 million. To compliment the stage, they also built a water tank that could hold over 1,000,000 gallons (5,500,000 litres) of water. The stage was so big that cinematographer Claude Renoir couldn’t effectively light it due to his deteriorating eyesight. As such, Stanley Kubrick visited the production in secret to advice how to light the stage.

The oil company Shell offered to lend an abandoned tanker for the production, but insurance costs got so high that they decided to use miniatures instead. 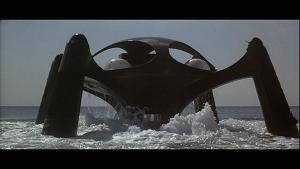 The movie features a car that can transform into a submarine, and to accomplish this, they built several models during its different phases of transformation. One model was actually a working car-shaped submarine. Other filming locations included Egypt, where shooting at location at the Great Sphinx of Giza created lighting problems, forcing the use of further miniatures.

Despite all of this movie’s production problems, the end product is well worth it. The Spy Who Loved Me is pretty much universally agreed upon as the best Roger Moore Bond movie, and it’s arguably up there with the best Bond movies period. It features what might be the best skiing action scene in the franchise (and every Bond actor’s got at least one skiing action scene). It’s got pretty much everything you want in a Bond movie, like great villains, an impressive gadget car, great performances all-round and enough plot twists to keep you guessing, at least on your first watching.

Upon its July 1977 release, The Spy Who Loved Me received a lot of critical and audience praise. It was praised for its special effects, Bach’s performance as an ideal Bond Girl, reducing the slapstick humour that marred the previous three movies, and toning town the characters for a more realistic tone overall. It ended up earning $185 million, almost double that of Man With The Golden Gun. Even with its then large production costs of $14 million, that made it a massive success. It also received three Academy Award nominations, one for its art design, and the other two are discussed in the next paragraph.

The theme song, titled “Nobody Does It Better” by Carly Simon, is also a wonderful theme song. It even received an Academy Award nomination for Best Original Song, ultimately losing to “You Light Up My Life” by Joseph Brooks. The song’s been featured in a number of movies since, like Mr. & Mrs. Smith, Lost in Translation, and others. The American Film Institute even mentioned it in their list of the 100 best songs ever made for a film as part of their 100 Years Series. The movie’s soundtrack, composed by Marvin Hamlisch, also received an Oscar nomination. It’s got more of a disco groove than most Bond films, yet it keeps most of the elements that makes it sound like a Bond movie.

In case you haven’t seen The Spy Who Loved Me, I won’t spoil too much about the actual plot. What I will say is that the villain’s plot feels like the kind of story that would work in one of the later Sean Connery movies. It’s epic in scale, and Stromberg is dangerous enough that MI6 and the KGB agree to work together fairly early on. It also introduces Jaws, a professional killer who is not only extremely tough, but is the only Bond villain in history to survive two movies. Jaws is awesome by the way.

This is not only by far the deadliest of the Roger Moore Bond movies, but the second deadliest Bond movie overall, only beaten by You Only Live Twice. Even though Roger Moore has the lowest average kill count per movie in the franchise, there are only two other movies where Bond kills 31 people or more.

The Spy Who Loved Me is a great Bond movie, and clearly demonstrates that even if a lot of the Roger Moore Bond movies leave much to be desired, they were never Moore’s fault. He’s great in the role and this movie shows Moore’s Bond performance at his prime. The action is often exciting and the plot feels like a classic Bond plot in all the right ways. The music and visuals received three Academy Award nominations, and for good reason. A lot of the sets would still be impressive today. If you only see one of the Roger Moore Bond movies in your life, make sure it’s this one.

I am a relatively new comic book fan writing this blog for other new comic book fans and/or people who are interested in comics but don't know where to start. I've always been interested in writing, to the point where I have a college Creative Writing Certificate and I'm currently a year 2 Journalism student. I also have another blog where I mostly make fun of bad movies - www.healed1337.blogspot.com As for how I got into comics, I've always had a passing interest in superheroes: most notably Batman, Spider-man and the X-Men. Until February of 2011 (I think,) my only experience with any of these franchises came from the movies and video games. Shortly after I bought Marvel Vs. Capcom 3 however, I decided to check out X-23, Wolverine's female clone. I ended up reading her Innocence Lost origin story and enjoyed it. From there, I started reading various X-Men comics and it quickly exploded into my newest hobby. My other interests/hobbies include video games, movies, music, playing sports, my dogs and weird news.
View all posts by healed1337 →
This entry was posted in movies and tagged 007, 007 the spy who loved me, academy award, agent triple-x, albert r. broccoli, anya amasova, barbara bach, claude renoir, eon productions, ian fleming, james bond, james bond the spy who loved me, karl stromberg, ken adam, kgb, lewis gilbert, stanley kubrick, the spy who loved me. Bookmark the permalink.